Although it's sacrilegious, rappers often profess to spit gospel through their bars and hooks. While a few have even attempted to spread the good word via rhymes, the message usually got blurred by the messenger. But in the Bronx there's an MC making religious raps-and he's got the credentials to back up his preaching.

In July, Franciscan friar and ordained priest Stan Fortuna released his third independent rap album, the 18-track Sacro Song 3. Fortuna, a member of the Franciscan Friars of the Renewal in the South Bronx, started rapping in 1987 in an effort to reach out to the youth in the community he serves. "I saw how effective [it] was and [that] kids were hearing it," he explains. "I'm basically just giving truth in all different areas in which kids are struggling."

Before entering the Franciscan mission, Fortuna, 49, was a professional jazz bassist, studying with improvisational pianist Lennie Tristano. But in 1979, he was summoned by something bigger than jazz. "Becoming a Franciscan priest was a direct result of being called by Jesus and being fascinated by the radical nature of St. Francis," Fortuna recalls, of his decision to join the Franciscan brotherhood, whose members take a vow of poverty and commit to serving the poor.

In the mid-'80s, Fortuna began to notice hip hop and its ability to both connect with listeners and chronicle inner-city life. "I saw it in its earliest stages," he recalls. "I saw guys beat-boxing and freestyling on the corner. They weren't interested in record contracts, they were just doing it." Later, Fortuna discovered a couple of rap deities who were less than saintly. "I was inspired by Biggie and 2Pac," he says. "Biggie was one of the gifted word crafters. 2Pac was more revealing. 'Brenda's Got a Baby'-I'm a Catholic priest, and I tell kids to go listen to that." Fortuna had been independently releasing albums in a variety of musical genres since 1987, and released his first rap project, Sacro Song, in 1998. He sells his music on his Web site, francescoproductions.com, and donates all his proceeds to his nonprofit organization, which helps needy families in the South Bronx. In addition, Fortuna now spends two-thirds of the year traveling the world performing and preaching. There's a documentary in the works about his life called Sent.

While the older members of his brotherhood were initially skeptical of his new musical direction, after seeing the response from the kids they serve, even they were converted. "They see that it works," says Fortuna. "We're looking after the neighborhood, and that's the best thing."

Call it hip-hop from a higher power. 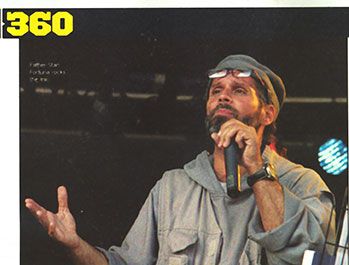